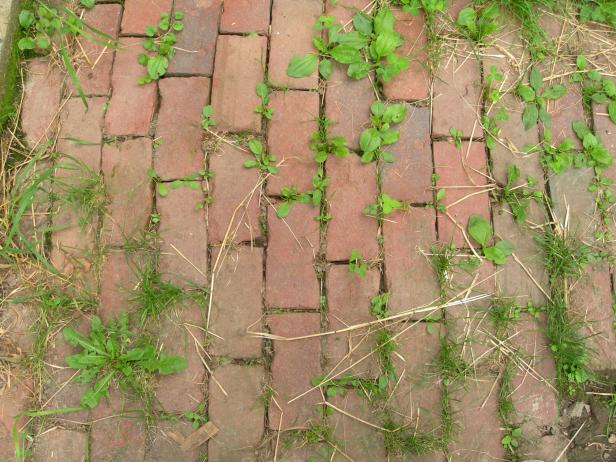 The definition of a weed is a wild plant growing where it’s not wanted, threatening to out-compete cultivated varieties or simply in the wrong place. If you want to remove weeds but don’t want to use chemicals, which can leave residues in our water, there are a few alternatives to try.

Knuckle down
Good old-fashioned elbow grease is required for some weeds. You should wear gloves when hand-pulling, as certain ones can cause skin irritation or be very prickly.

It’s often hard with emerging plants to tell what is a weed. Some produce large quantities of seed, so need to be tackled before they spread.
Annual weeds are easier to pull out by hand, as they’re shallow-rooted, though you may need to use a fork or hoe. Make sure you choose a dry day for weeding, so the seedlings will dry out and shrivel on the top of the bed rather than re-rooting in moist soil.
Perennial weeds are harder to tackle, as they have long tap roots. It’s easier to dig out perennial weeds when they’re small, but if you have areas where plants such as ground elder, which has underground stems (rhizomes), and horsetail are a problem, you may need to dig out the whole bed. Once cleared, you’ll need to put down a root barrier with weed-suppressant fabric, which helps to stop light reaching weeds.  Getting rid of persistent weeds takes time and you may have to leave large areas bare for a while to make sure you’ve eliminated all or at least the majority of them.

Go natural
Some weeds are very stubborn to remove, such as those that grow in the cracks in paving and have long tap roots. It’s easy just to break off the top of the weed but leave the root firmly wedged.
You can try using a weed knife, which has a hooked end, and there are many other tools now available for this task.
There is some evidence that using vinegar can be successful as a weed killer. For problem areas, such as in-between paving, you’ll need horticultural vinegar, which is stronger than eating vinegar, containing about 20 percent acetic acid. A word of warning: vinegar is non-selective. If you use it in areas where you have plants you want to keep, it may kill those too.
Be wary of using salt. It too is often talked about as a weed killer due to the osmotic pressure it causes on the soil (meaning water cannot reach the root of the plant, which will, therefore, die of drought). But this method is not proven, and salt can affect the pH of the soil. It can also make concrete surfaces more susceptible to erosion.
Using a flame gun to scorch weeds in-between paving and on driveways may be the most effective of all. Do make sure the foliage is dry and allow enough burn time to kill stubborn weeds. Make sure to check that there aren’t any fire bans in your area before attempting this.
There are also some organic, biodegradable weedkiller sprays on the market.

Eat your weeds!
Some weeds – dandelion, chicory and dock, for example – are great to eat and provide vitamins and minerals. In fact, in the Middle Ages, weeds were eaten frequently, filling the gap between winter and summer crops. Of course, make sure you know exactly what you’re picking before eating anything.
The leaves of dandelions (Taraxacum officinale) are a great addition to a salad – they’re a little like rocket. They’re also rich in vitamins A and C as well as beta carotene, and the roots contain inulin, which helps to regulate blood sugar levels, and taraxacin, which aids digestion.
Nettles make a wonderful herbal tea and are lovely in soup. They taste a bit like spinach and are rich in minerals, including magnesium and potassium.
Clover is a wild weed than can be made into a tea. The sought-after red clover contains large amounts of vitamin C, niacin, chromium and especially isoflavones, which are water-soluble compounds that act like oestrogens and are often used for the symptoms of hot flushes during the menopause.

Ditch the digging
Apart from getting a goat, which will happily munch away at vast swathes of vegetation, there are other ways to get on top of weeds in large areas, as well as in the flower bed or vegetable patch.

The no-dig method of gardening, which is becoming more and more popular, is one way to tackle weeds, especially if you plan on growing fruit and vegetables. The idea is to raise your planting rather than digging into the soil. You cover your beds with wet paper or cardboard, onto which you put compost and top it off with landscape mulch.

This layering of beds above the ground means the soil is uncultivated and will develop its own aerated structure for plants to grow more easily, eliminating large amounts of weed growth.

Introduce competition
Emerging weeds are naturally going to compete for resources with cultivated plants. The best way to prevent this from happening is to crowd them out in your borders so they can’t take hold in the first place.

Ground cover plants, such as Phlox subulata, Alchemilla mollis, liriope and Nepeta x faasseniiwill thickly spread and choke out any weeds. These plants either have a spreading habit or are low-growing. They will provide a dense cover to suppress the germination and development of any seeds, preventing them from becoming stubborn weeds.

Keep on top of mulching your beds with organic matter. Mulching is probably the best way of keeping beds as weed-free as possible, as it will starve the weeds of light, but try to keep it clear of any grassy areas and woody-stemmed plants. Mulch the base of your plants to a depth of around 10 centimetres.

Embrace (some) weeds
Weeds are an important food source for foraging insects such as bees.

Although we want to eliminate weeds in our gardens, we should also think about the value some of them provide for our wildlife. Weeds shelter the larval stages of many insects in the winter and provide nectar for pollinating insects in the spring and summer months.

Dandelions and nettles, for example, are a great food source for bees, hoverflies, caterpillars, beetles and butterflies. Hoverflies are the forgotten pollinators and are so useful in the garden, as they can eat thousands of aphids. They favour brambles, while butterflies such as the red admiral and peacock varieties love clover as well as nettles.

If you have a big enough garden where you can let it become a bit wild and the weeds can grow freely, even just in certain areas, you’ll be helping many forms of wildlife anarticlets.

This artical is thanks to Houzz